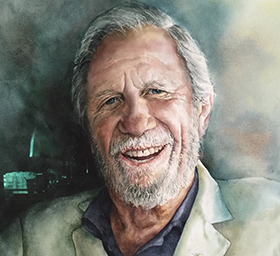 After 35 years working in the clothing industry, Maurice decided t0 enter the nursery business. In 1981, he purchased Andreasens Nursery then operating on a five-acre lot on a 10-acre plot in Lansvale. As business commenced an article described the nursery industry as a ‘sleeping giant’. Soon after, the Lansvale nursery increased to 10 acres. In 1981, as the business was growing rapidly, an additional 50 acres was purchased at Kemps Creek. The business continued to grow quickly and a decision was taken to purchase a further 75 acres at Mangrove Mountain in the Central Coast region. All three nursery sites are now fully developed. During that period, South East Queensland was considered a good growing area and a further 50 acres was developed in Coomera. Again, Andreasens expanded operations in 1985 with the development of another 50 acres in Yatala, also in South East Queensland. This year, Andreasens Green purchased Alpine Nurseries.

Maurice now believes that the industry is no longer a ‘sleeping giant’ but a burgeoning sector of the economy.