by The Landscape Association

We sat down with TLA’s new President, John Kalocsai from Greenworx Landscape Management to find out more about his business and what makes him tick.

John achieved success in the building and facilities management arena whilst being employed by major players in that field. In his role as State Manager at Programmed, he managed in excess of 150 staff across 2 states and was responsible for departments which turned over more than $85million in annual revenue.

John joined Greenworx in 2012. He takes great pride in the culture of the business and enjoys the opportunity to mentor his staff.

His focus at Greenworx is primarily business development and key account management. In addition, he estimates and oversees the delivery of key works projects.

On a personal note, John has been married for nearly 23 years and has 3 children. He has always been drawn to the outdoors and nature, loves camping and sitting around a fire. He has a history of volunteering and community engagement and has done everything from coaching junior and senior sporting teams, held positions of Club Secretary and President for his local soccer club and along with his wife, has been a foster carer for many children.

John is still active, playing soccer through winter & water skiing through the summer. He confesses to owning 2 surfboards though still can’t surf – but will never give up trying to learn.

Describing himself as an  “all or nothing personality” in 2018 at the age of 46 John competed in his first Ironman Triathlon (3.86km swim, 180km bike ride and 42km run) in a little over 14hrs. Quite a feat for someone who only realised four years earlier that he was a pretty poor swimmer and trained to improve!

Introduced to TLA by Chris Richardson of Skyline through a mutual acquaintance, John was very keen to join the Board (he’s been a Board Director with TLA since 2019) . With his many years of major contract and corporate experience John adds great value to the Association and has really enjoyed his involvement to date. 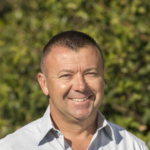 You can find John on LinkedIn here or visit Greenworx Landscape Management here.

Comments posted to this page are moderated for suitability. Once your comment has been checked it will be uploaded to the site.